skip to main | skip to sidebar

I just put Buddha to bed for the last night. After his favorite stories and my favorite lullabyes, he fell asleep in my arms. He hasn't done that in ages, having grown out of it by about 18 months, but I guess he was good and tired tonight. I'm really grateful for that.
On a different note, I want to make a little query. If you are a reader who knows me IRL (in real life), would you please leave a comment? So far, I only know of a fellow foster parent and I know my sister, derangels, used to read- not sure if you still do, sis. If there are others, I'd like to be clued in! Thanks.
Posted by starevelina at 5:57 PM 4 comments:

When birthday parties are going away parties.

Buddha has officially celebrated two birthdays in our family. He had a good time with his little friend, loved his cake, enjoyed all his presents and went to bed late. My mother made him a wonderful quilt. I can't believe he's two. I want to see him be three and four and more. We're truly going to miss him. He leaves next week.
Posted by starevelina at 6:18 PM 1 comment:

Buddha's new favorite snack is rice cakes. He is also obsessed with the only video he's ever seen which is a National Geographic-type DVD we have about birds. Every day when he gets home from daycare he runs in the house, asks for a "Gai Gake" and sits down to prepare for his career in Ornithology. Sometimes he insists on wearing his straw bowler hat.
Cutest. Child. Ever.
Posted by starevelina at 2:29 PM 2 comments:

Just a quick wish for a blessed spring equinox for everyone. We've got eggs and flowers and butterflies mixed with baby-shower-planning galore over here in fostermamas' house! Still hoping for a little devotional time this week. Happy spring!
Posted by starevelina at 10:54 PM No comments:

We go through an approximation of the following conversation on at least a daily basis, but the punchline was new today:

Prancer: Can I have strawberry wafers?
Me: No. We don't have any.
Prancer: Why?
Me: Why didn't we get any at the store today?
Prancer: Because I didn't listen. `Cause I drive you nuts!


Oh, and he wants Barbie dolls for Christmas.
Posted by starevelina at 4:30 PM 1 comment:

That was whiney and negative about my boy. And I do have some ideas.
First, things I like about Prancer:
He's warm and affectionnate, loves almost everybody, and is often a little ball of joy.
He cracks jokes and is a total goofball.
He loves us a lot and we love him, too.

Ok, second, since biting is a major problem, I'm going to send him to school with a teething toy (after I get permission from the school- toys are not usually allowed in from home). The question is, should I fashion it such that he can wear it on his person? I could put it on a lanyard and attach that as a necklace or as a sort of wallet-chain. Then he would have easy access when he feels like biting. Or would that be too conspicuous and should I keep it (and a little hitting-pillow) in a box in his cubby for teachers to direct him to?

Not so sure about the hitting pillow. It can't be too big, but if it's too small, he'll hurt his hand. Poor kid- he needs a Damn-It Doll! Speaking of which, so do I. . .
Posted by starevelina at 6:11 PM No comments:

I shouldn't have said that.

I should just know better than to say anything optimistic. Our lovely weekend was followed by two school incident reports in three days. Prancer's always had an aggressive streak in the time we've known him (almost a year now), but I don't understand how he could become suddenly, markedly worse one day and stay that way. It's going on 4 months. Nothing seems to make a difference. I can't make him stop hitting and biting. It's embarassing and undermines my own confidence and I don't know what else to do about it that we haven't done already, and that makes me feel incompetent. I hate being the parent of the bully.
Posted by starevelina at 3:10 PM No comments:

Wondering what this blog is about? Try these: 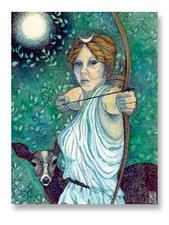 Self-possessed goddess of the wild, night, magic, childbirth, and women.